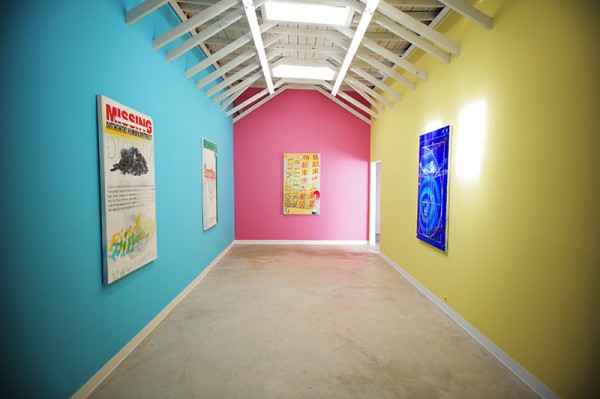 Documental, the cleverly titled, debut solo show of Los Angeles-based artist Rachel Lord, features four large, colorful paintings that take on and manipulate the historical form of the document. Lord has made a work of the entire gallery, painting each wall from floor to ceiling in complimentary colors to create a vivid environment that feels a bit like a barn crossed with a church crossed with a children’s after school program.  The ongoing series of paintings began with what she and fellow RISD alum, collaborator Ryan Trecartin, refer to as a “conscious commission.”  The two had worked similarly on a series of “conceptual credit card paintings” that Lord made several years ago, which were used in some of the sets for Trecartin’s 2009 video series Any Ever, which went on to travel with the work in an installation titled Access Quad (2009).  In this instance, Trecartin, (whom it should be noted, originally conceived of this new project as part of a feature in China’s Modern Weekly Magazine), again gave Lord a set of verbal cues from which Lord created a new body of work that both complicates and celebrates various forms of documents; the missing poster, the stock certificate, the palimpsest and the blueprint.  Each of these paintings will be used as part of the sets in Trecartin’s forthcoming video project.

While the four types of documents that Lord uses as her starting point are familiar enough to most, the formative tension that inspired their manifestations came from a somewhat surrealist dichotomy that Trecartin has used to shape his current video work, the abstract balance between “the Superposition” and “Timed Reality.”  “Timed Reality” being our current moment as we know it, and “Superposition,” which can be understood as taking place in the future, yet outside of our range of any tangible sense of a time-based reality.  From there Lord filled in the blanks with conceptual and aesthetic concerns that she has often taken up throughout her practice.  Clearly text plays a large role in each of the paintings, as it also does with regards to the specific kinds of documents she uses as templates.  However, it is made evident that here text, and a multitude of languages, are decidedly complicated through an intermingling with one another. 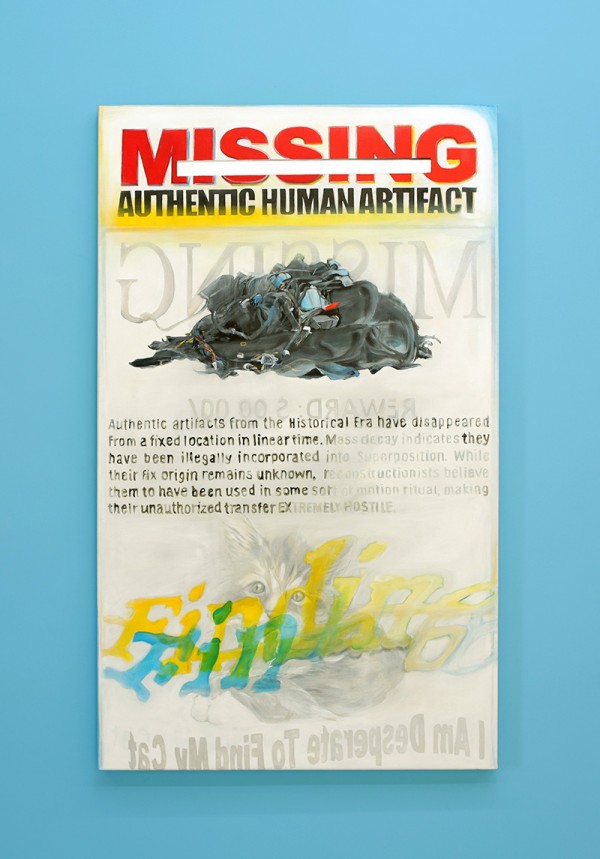 In Missing Poster, we see that some of the words and signage conventions are authentically rendered to appear like those in a real poster of this nature, yet at the same time other words are painted (though made to look like they are printed), backwards, shadowing one another.  The French word for finish or end, “fin,” is transparently laid atop the more important word, “finding,” which in this case iterates the poster’s objective—to find a missing cat.  Not only are languages, syntax and typeface mixed together, it is clear that they have been carefully and deliberately layered one on top of the other.  In this way Lord has recreated, pass for pass, the Photoshop process with which she initially made the sketches for these elaborate images. 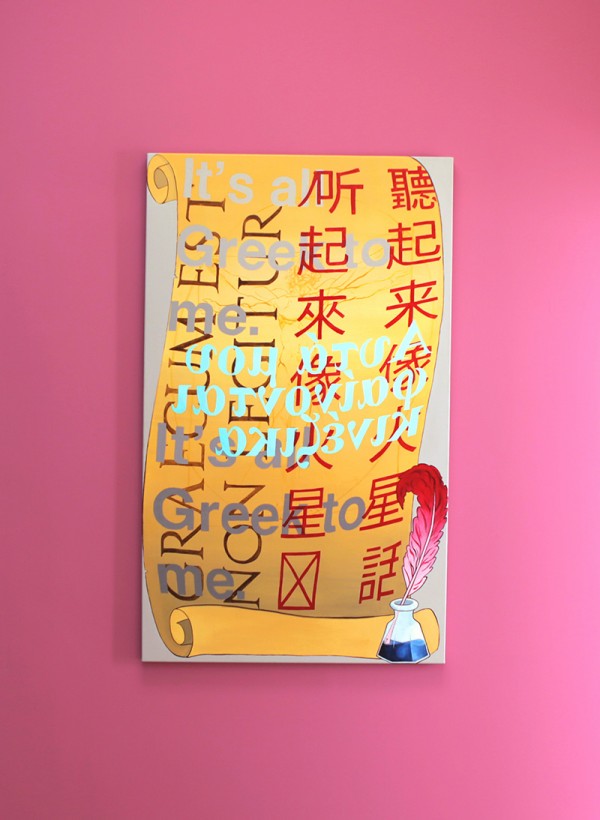 The labor of layering is even there in the title of the exhibition, Documental conjures not only the obvious, governmental validity of certified documents, but it also harbors ‘mental,’ as in, of sound mind or otherwise, and elemental, as in, exemplary of part of something larger and multifarious – not to mention the glaring reference to the looming profundity of Documenta, perhaps a whole other can of art historical worms. We see in Stock Certificate and Palimpsestas well that there are multiple points of reference at play, each ramming into one another in ways that produce as much linguistic confusion as they do visual delight.  The bright, glowing yellow, cartoonish scroll painted just to fit to the frame of Palmipsest lives up to its title byjuxtaposing phrases in English, Chinese and Latin in various directions all over the canvas.  The English is painted in a light grey, Sans Seriff, a-personality-esque font that takes a back seat to the deep red of the Chinese characters and the pale turquoise Latin, which makes for the top layer of paint.  Underneath it all we can read, “It’s all Greek to me,” poking fun at the notion of even attempting to decipher something as fluid and overlaid as a palimpsest in the first place. 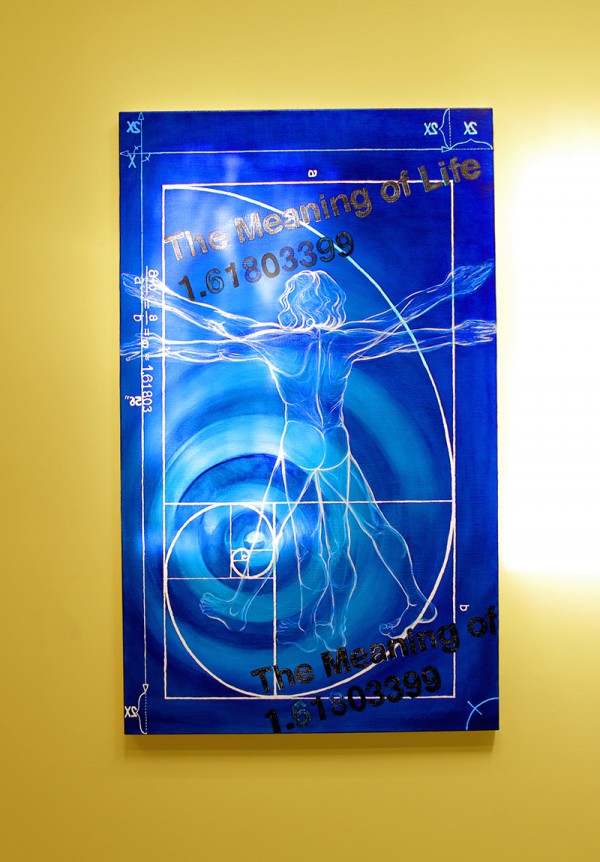 When standing in the middle of the gallery surrounded by each of these four takes on such documents, the imagery and the referents begin to blend together just as quickly as they then separate from one another, causing the issue of legibility to rise to the fore in ways that relate not only to Lord’s work but also certainly to Trecartin’s and that of many other young artists who are attempting to navigate a vast sea of information without necessarily steering the course, or any course for that matter.  Nonetheless, Documental certainly points to the ways in which totems of social structures are becoming further and further extrapolated and reified from their original usages and well-trodden conventions. To reimagine something as permanent and binding as a legal document into a painting that takes into account the histories of alphabets, idioms, currencies and diagrams (to name just a few of the referents that Lord has imbricated within these complex works), is an entirely new range for what has often been considered a dull or even decaying form of contractual agreement. 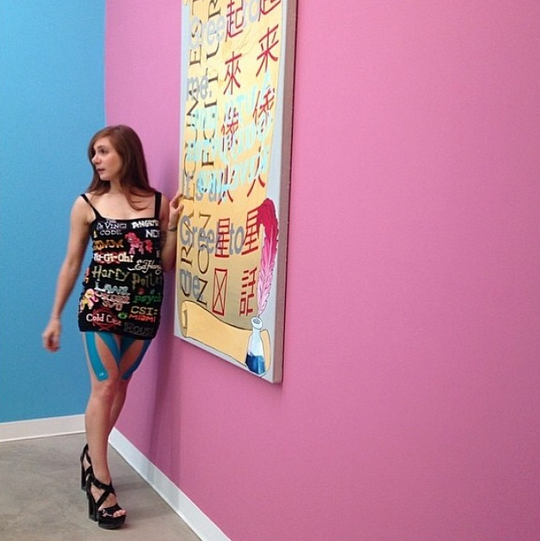 Rachel Lord posing in front of her work @rlord_raw