Here you go New York. Here is your living underground, your young artists squatting—occupying!—that mythic zone the city is said to have once possessed. Declaring a guerilla gallery under the Brooklyn Queens Expressway, Marie Karlberg and Lena Henke are giving you what you want: a Skulptur Projekte Münster of new art set amid syringes, take-out containers, broken strollers, human shit. Raw and cold-pressed, art looks good when it comes from dirty places. And it’s into this kind of decaying urban ground—a scarce resource in NYC these days—that art can dig its talons in deep, can begin to fertilize the landscape for “cultural use.” Does this excite you? Set in virgin wasteland, it could be the opening sequence of a rape scene. But not to worry, things won’t get too graphic. Violent crime in this city only happens on Netflix these days, and besides, this show is only an opening. The work won’t even stay the night. Photos will be taken though—a whole set of professionally shot images to be used later for editorial purposes or for communicating the zeitgeist of the early teens, proof that ‘even just ten years ago’ the bohemian glaciers extended all the way to Lorimer Street and Meeker Ave.

Yet in truth, the scenario described here couldn’t get any realer. Work exhibited under a highway overpass might be what the market desires, but also, there’s few other options available for artists who are still pre-blue chip and yet too self-possessed to brand themselves as “Marxists” and pander to the feel-good liberal missions that most American non-profits and granting organizations seek to promote. The conditions of a Post-Giuliani, post-Bloomberg New York might be “healthier” statistically, but to all without the financial capital to stake out real estate of his or her own, they are, like the rules of a deranged parent, abusively infantilizing, too. Stay poor, stay young, stay cute and we’ll cleanse our capitalist souls by providing for you, they seem to say. Meanwhile parking lots, bedrooms, nail salons (stay tuned for the two M/L shows to follow)—it’s practically only in these kinds of after-school spaces that new art still feels possible and as yet not co-opted. Install your show in a new tract of green-space, and you fit right into the developer’s CAD drawing plan. Have your show in an off-space and, like an abiding child, you provide the content to which the classy parent operations so dearly want to link—and do link, and are the reason why a seemingly off-the-grid gallery (as though anything is legitimately off the grid at this point) can continue operating the way it does, or perhaps can only operate the way it does.

This saturday, September 28th! Be sure to get there while it’s still bright out, because this show packs up and disappears right after sundown – unless it finds itself home among the strewn and forgotten. 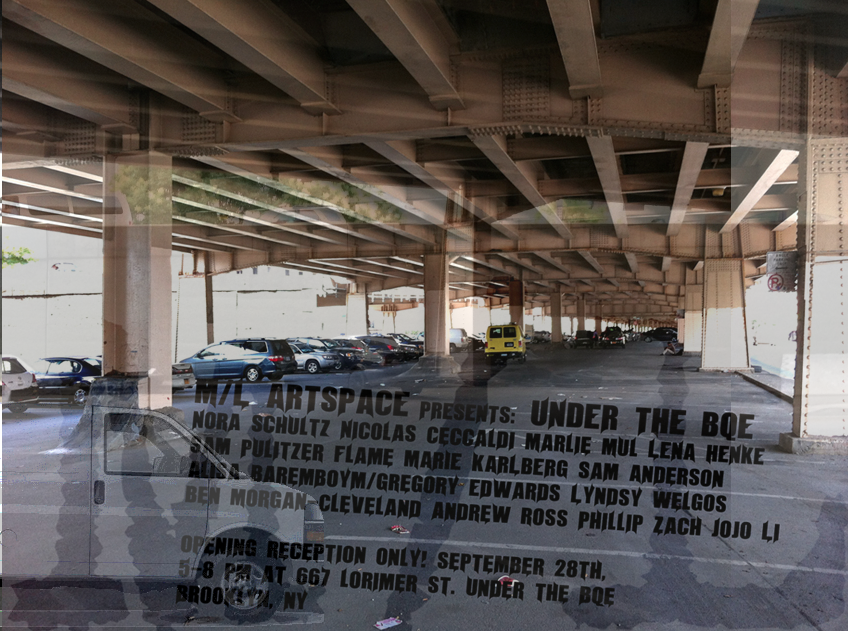