Sam McKinniss is an artist in New York and adjunct faculty member of the NYU Steinhardt School of Culture, Education, and Human Development. 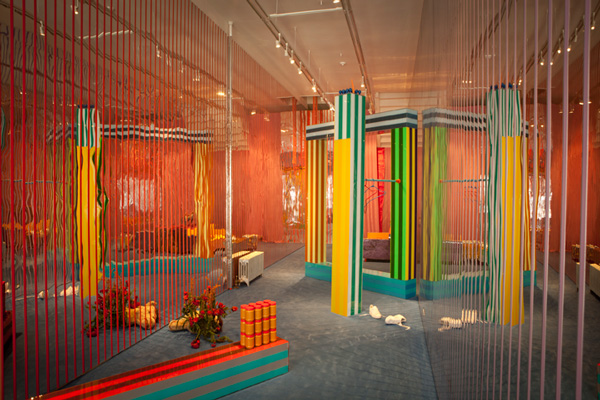 Animator of the inanimate, elegant and ridiculous, Alex Da Corte is a dysphoric sadomasochist, stalked and bemused by popular dread. Everyone is talking about the artist’s latest exhibition 1 0 0 0 I S L A N D at Joe Sheftel Gallery and yet forming a worthy response to the funhouse spectacle seems unlikely. What fresh hell is this? Da Corte has woven overwhelming detail into the fiber of this highly networked installation, filigreed and arranged for unsettled visitors to unravel at their leisure. In the face of such totalizing dizziness, I’ve managed to write down the following. 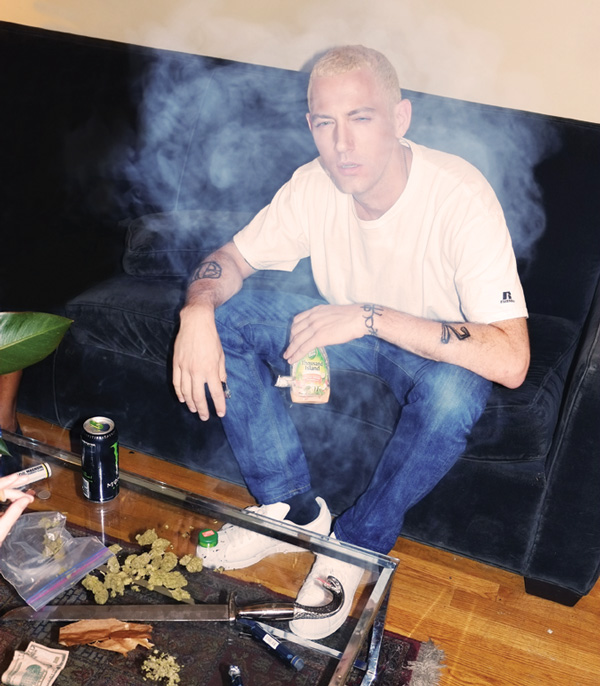 1. This is a show about Da Corte’s infatuation with the controversial rapper Marshall Mathers, aka Eminem, born in 1972 and world famous by the year 2000. He is a strange but welcome fount of inspiration. To see someone go hard with fanatical celebrity obsession is wonderful and perverse, the likes of which we haven’t enjoyed with conviction since Elizabeth Peyton taught the art world how to love Kurt Cobain. As it just so happens, Da Corte borrowed a portrait of Eminem made by Peyton and hid it inside the installation. The picture, done in Peyton’s sentimental style, is partially obscured at the back of the gallery, resting on the floor of a crawlspace behind some custom-made furniture and facing itself in a mirror. Da Corte designed an animation cell to overlay on top of the painting with cartoon paintbrushes dipping and sliding across the picture’s surface, a jarring alteration. Eminem is an odd muse, but he is a talented guy from Detroit, a failed city with desperate economic problems, depressed beyond salvation. 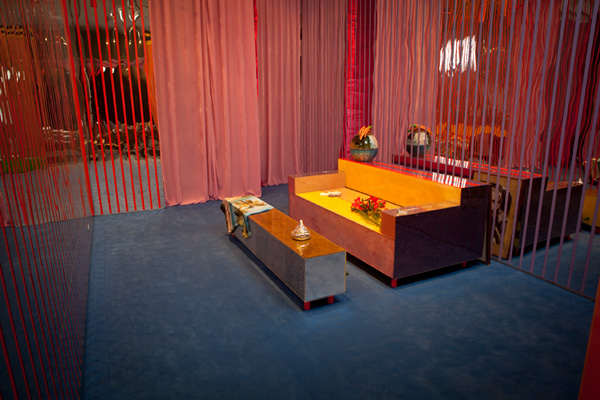 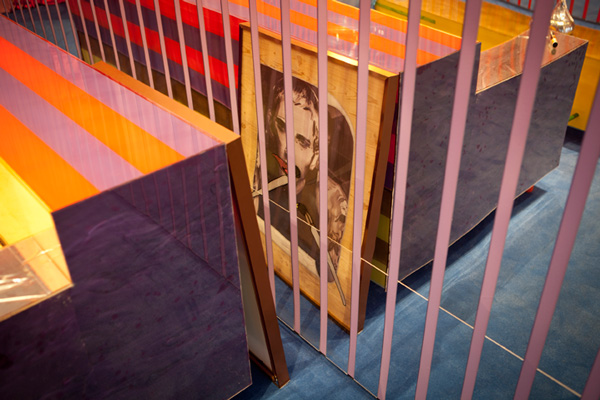 2. The installation must be visited in person. 1 0 0 0 I S L A N D is Gesamtkunstwerk, of sorts. It cannot be properly appreciated in jpeg form alone and this poses a problem for quite a few people indeed. Most of Da Corte’s prior work is available for online viewing and not too terribly much goes unnoticed when viewed this way. Previously his sculptures, wall-pieces and installations have relied compositionally on frontal orientation for optimum digital exposure. Photographed in ultra-bright white gallery space and tossed up onto Tumblr, the work has been viewable this way by design, in accordance with contemporary methods for artworks’ rapid dissemination and impact. As Gesamtkunstwerk, 1 0 0 0 I S L A N D is a total surrealistic environment, nary a white wall in sight. The installation occurs in “real” space as a garish set design with elaborate wall treatments, structural build-outs, sculptures, found objects, fog machines, optical illusions, the borrowed Elizabeth Peyton painting, a press release and an ad in Artforum. Being in the room is fundamental to the experience and bad news for regular readers of Contemporary Art Daily. A good-looking piece of bad news is never incidental. The dimly lit, aggressively non-white space is a deliberate upset to smartphone IPS screens everywhere, to our web-addled zeitgeist, pause for the velocity with which visibility and value are achieved through aggregated online stratagem. 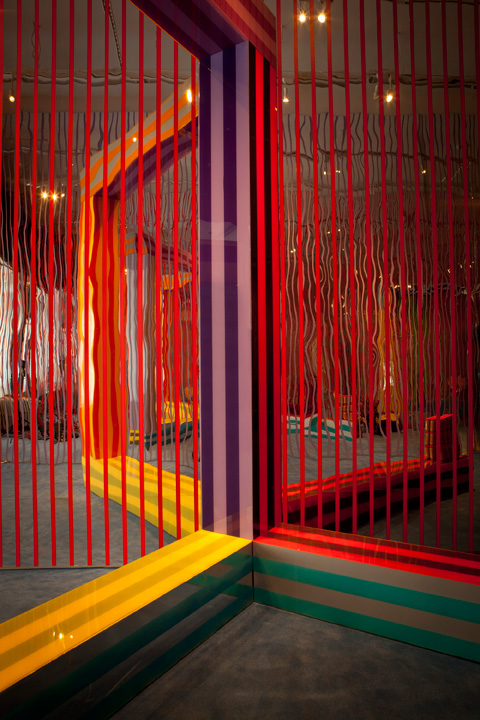 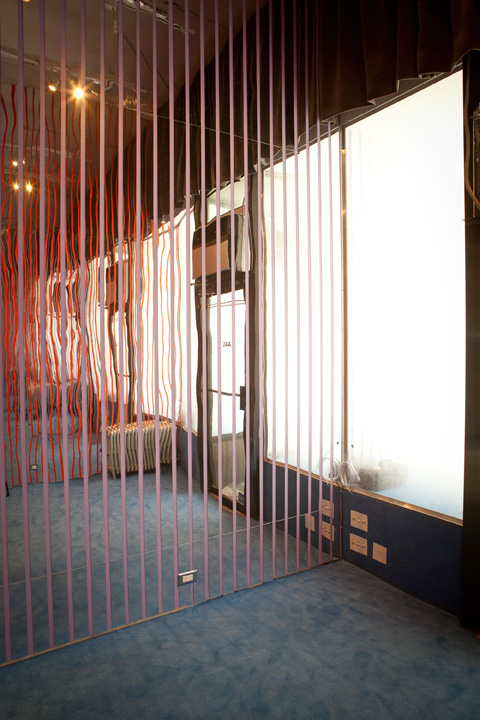 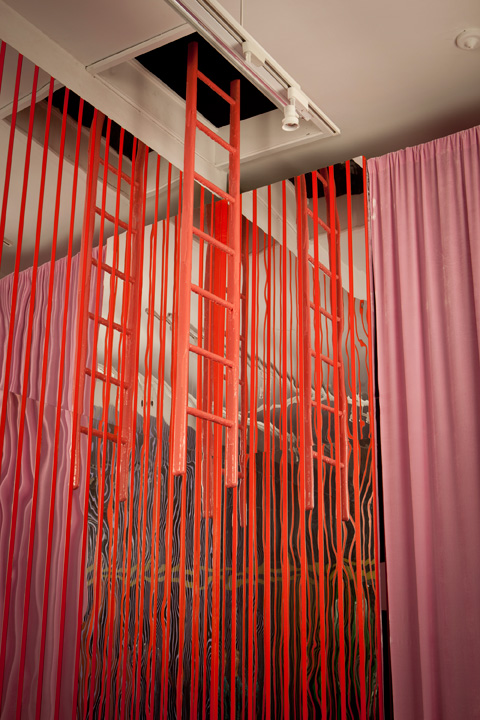 3. Before visitors enter the gallery they encounter storefront windows filled with a dense white fog. This is impressively funny and baits anticipation. Once inside, visitors are confronted with an expansive funhouse mirage. High walls extend outward, painted bright orange and lavender on opposite sides, striped regularly with floor-to-ceiling mirrors. Facing one another, the mirrors expand the narrow room’s boundaries toward infinity. Blue carpet undulates underfoot in refracted patches of light, taking on the character of an unreal oasis of water. Rectangular, prismatic post and lintel structures jut out from the walls and interrupt the interior, striped in a multicolor fashion similar to the walls. Fixed askance between infinity mirrors, visitors may recall that Eminem’s 1996 debut album was a commercial failure. The disc was titled Infinite.

A horse’s head from a fuzzy mascot costume lies dead, disembodied on the carpet. Red rubber flowers grow out of its neck, bloody, violent, stupid and funny. The thing is called Dedication Monument (for Kim) after Gentileschi. This is for Kim Mathers, Eminem’s ex-wife and target of a few of his most insane and memorable diatribes. Naming the piece after Artemisia Gentileschi, 17th century rape survivor and painter of Judith Beheading Holofernes, Da Corte grants Kim the gift of female revenge. Mr. Mathers’s preferred footwear lies nearby. Empty white Adidas shell-toe sneakers: a suggestion that her vanquished oppressor’s ghost lurks somewhere in the air.

At the rear of the gallery sits a chic couch and coffee table set, fabricated out of reflective (reflexive) materials, providing a base for a handful of smaller objects. A rubber ladder deploys overhead, out-of-reach, giving an air of M.C. Escher-like egress and entrapment. This area forms the best-looking expression of Da Corte’s style we’ve yet to come across. Surreal found object juxtapositions integrate with the furniture to psychedelic affect. Materials used include shampoo and conditioner, aluminum foil, plastic bowls, a basketball, lids to Gatorade bottles, more rubber flowers, floppy rubber carrots, a lighter, a pair of mime gloves, exquisitely arranged into a domestic nightmare genre scene, a glittering, never-ending mise en abyme between mirrors, the literal recursive phenomenon. 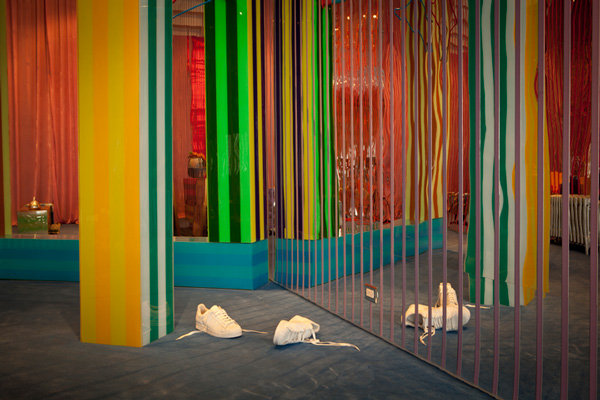 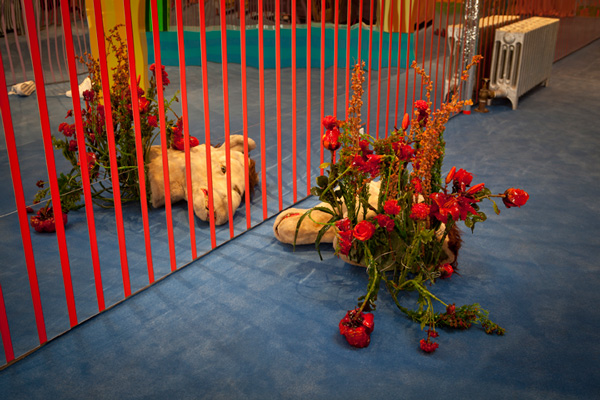 4. Joe Sheftel placed an ad in the September issue of Artforum featuring an image of Da Corte styled and posing as Eminem, smoking a bong made out of a thousand island salad dressing bottle, piles of weed laid about a coffee table along with a can of Monster energy drink, a sword and a wad of American money. The coincidence of Da Corte’s uncanny physical resemblance to Eminem makes it possible for the artist to enjoy a credible go at mistaken identity. The classic narrative ruse of mistaken identity affords the artist access to the white rapper’s baffling identity politic, as well as a chance to shake up Pop Art’s lasting obsession with celebrated faces.

The gallery press release says nothing about the art, revealing everything in the process. The release repeats an excerpt from an interview with Eminem conducted by the journalist Anderson Cooper, pop star in his own right. The piece aired on 60 Minutes on CBS in 2010. During the segment, using a psychoanalytical game, Cooper asks Eminem to imagine a desert, a cube, a ladder, a horse, some flowers and an approaching storm. Eminem cooperates and describes the mirage he’s envisioning. Eminem’s imaginary elements provide creative prompts for Da Corte’s found object sculptures as well as a setting for them to exist in.

“AC: I’m going to ask you a few questions and I’d like for you to answer them as honestly as possible.
E: Okay.”

Though Da Corte poses as Eminem in Artforum, in the press release the initials “AC” signify the voice of Anderson Cooper. “AC” may just as well represent Alex (Da) Corte. One begins to realize that in the act of creating this show, the artist assumes both sides of an intimate conversation between men, one: famous (homosexual) journalist, the other: provocative rapper with hard looks and an attitude. Da Corte absorbs both identities. If Eminem and Cooper’s conversation ended sometime in 2010, there is a new endpoint now. The new conclusion climaxes within Da Corte’s body, as the result of his labor, orchestrated to revive a trivial item from American popular media, conducted in the manner of infinity.