The Gagosian Doesn’t Want you to See this Image. 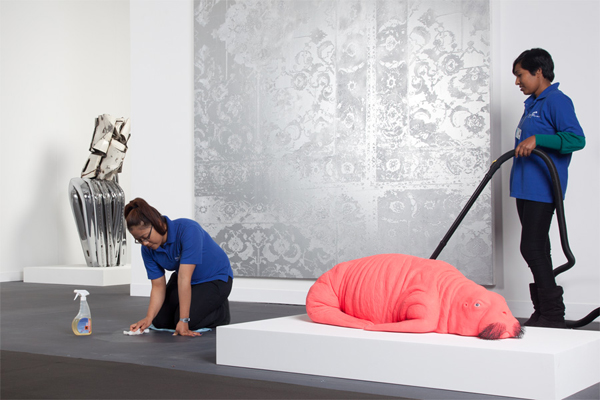 There is a big silver-grey painting, or perhaps a piece of metal, that could be mistaken for a carpet covering the back wall. There is a pink walrus on a low plinth. There is a scrap metal sculpture on a pedestal around the corner. Two women are cleaning the art fair booth. One, on the right, holds a vacuum cleaner hose and looks with a faint smile at her colleague who is on her hands and knees cleaning and invisible spot on the grey floor.

Though the gallery had initially consented to their participation in a photo shoot by DIS Magazine, Gagosian Gallery subsequently refused to permit the showing of this image in the context of the Frieze Art Fair. This prompts us to question what the motivation for this act of censorship, never explained, really was. What follows is speculation:

Since the Gallery chose this particular triangulation of pink walrus, scrap metal assemblage and silver carpet/painting/metal sheet, we can assume that it was not the reproduction of this constellation of things that proved contestatory in the eyes of the most profitable gallery in the world.

If not those three, we will have to assume there was something about the two women that proved undesirable for Gagosian. Was it their mere presence, as people in an environment of objects, that provoked their banishment? Or was it their presence as woman, women of color to be precise? Or was it their occupation as cleaners that was so upsetting? Or was it, finally, some combination of all three?

The art market is an object world. The buyer is presented with white walls and objects as clean as if they emerged out of those very surfaces. But this walrus, silver hung square and metal heap would not be as desired without certain unseen, but nevertheless crucial people:

The “people” the art market favors thinking about is the lone artist toiling in his studio. The artists assistants that typically contribute to the production of artworks with Gagosian price tags are much less favorably thought of–or rather, they are not thought of at all. Then there is the dealer’s side of things. A private equity art aficionado decides to buy art particularly when it is sold by Larry Gagosian. This is why the man’s name is on the door and why it is less interesting to think of the 150+ staffers of Gagosian Gallery (let us also, as an aside, assume that it was not Larry Gagosian himself who made this particular judgment call, but rather one of his minions who–perhaps fearing reprisal from the boss or a potential drop in prestige and, subsequently, sales prices–was behind this specific act of iconoclasm.)

Far behind the artists assistants and the dealer’s minions are a slew of people who are employed to keep up appearances and therefore must remain especially invisible. Should they finally be seen, after all, buyers risk remembering that this is just a shopping mall like any other; that unwanted objects always gather dust after a while; that people earning minimum wage do in fact interact with priceless things; that people are not always white like gallery walls; and that walruses are not in fact ever pink.