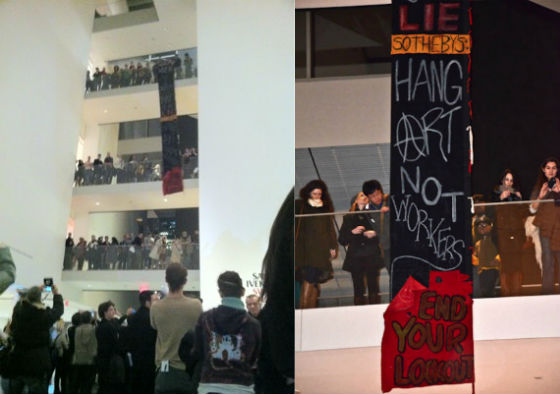 To the Acquisitions Committee at the Museum of Modern Art,

As you are aware, on Friday January 13, 2012, a coalition of art groups from Occupy Wall Street including Occupy Sotheby’s, Occupy Museums, and OWS Arts and Labor joined in an historic protest within the walls of your institution. The immediate purpose of our protest was to call for an end to the nearly 6 month lockout of unionized art handlers from Teamsters Local 814 by the Sotheby’s auction house. Sotheby’s sold 3.4 million dollars worth of art in the first half of 2011 alone–a record profit–yet it wants to cut the health benefits and pay of the workers that make its operations possible on a day-to-day basis. We chose MoMA as the site for our protest because your institution has various ties to Sotheby’s, including shared board members. Furthermore, Sotheby’s board member Danny Meyer is the CEO of Union Square Hospitality group, a corporation that owns the three MoMA restaurants and many more throughout the city.

Our assembly at MoMA, which involved more than one hundred participants, culminated in the dropping of a large red-and-black banner from the 5th floor of the museum into the central atrium. Designed by a group of OWS artists called the Novads, the banner read “When art is just a luxury, art is a lie, end the lockout!” and “Sotheby’s: Hang art, not workers, end your lockout.” The banner-drop was captured by dozens of cameras, and images of the event are rapidly circulating across the globe.

Minutes after the banner was dropped, it was taken without our consent by the MoMA’s Director of Security. We would like to make it clear that we consider this to be a unilateral acquisition. It was a hostile appropriation of our art by your museum. Institutions around the country are negotiating with OWS to acquire archival materials for their collections, and through this act MoMA has now made itself an important site of this national debate.

If the museum is serious about acquiring this artwork, we demand a proper negotiating platform and acquisition-process. We therefore present the following conditions for MoMA in keeping the historical banner of January 13th as part of its permanent collection:

1. MoMA releases a letter addressed to Sotheby’s calling on them to end the lockout of Teamsters Local 814.

2. “Target Free Fridays” are never publicized by MoMA without citing the Art Workers’ Coalition whose protests led to free museum days in the early 1970s.

3. Whenever the banner is on display, the details of its acquisition, including the action of January 13, 2012 are available. Any accompanying text must be approved by Occupy Museums and the coalition of groups that collaborated on this action.

We would be open to meeting to discuss the logistical details of these conditions; but if our terms cannot ultimately be met, we respectfully request the return of our art.

As part of the Occupy Wall Street movement, Occupy Museums is concerned with advancing economic justice in the cultural realm for the 99%. We believe that art and its history is part of the commons, and we are acting to take it back from corporate interests. Our concerns exceed any single institution, and this is only the first of many interventions planned for the Spring and beyond. Expect us.