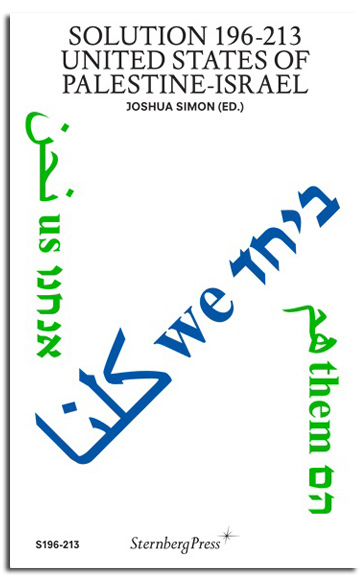 Solution 196–213: United States of Palestine-Israel (edited by Joshua Simon), is an anthology of texts proposing a doable solution for the region. With contributors based in Ramallah and Tel Aviv-Jaffa, Vienna and Berlin, Beirut and Jerusalem, New-York and Bethlehem, Nazareth and Warsaw, the book offers eighteen solutions and ways to do them.

There are two events dedicated for the book in NYC:

Although they think that Israel’s policies toward Palestine are inhumane and violate international law, many leftists and liberals believe that the country is at least a democracy that protects individual liberties—and those of gays and lesbians in particular—like no Muslim country does. So while they bristle at the most recent outrages committed by the Israeli government, they are also glad that the same government fends off Islamic legislation.

The Palestinians have one of the highest birthrates in the world, and even though Israel welcomes immigrants from all over the world, the Palestinians, including the millions who live in exile in Jordan and Lebanon, outnumber the Israelis. That is probably one reason, conscious or not, why starting families is especially popular among Israeli gays and lesbians.

But who looks out for the gays and lesbians in Palestine? Those who openly attack the Palestinians care little for their rights. Those, on the other hand, to whom these rights matter usually consider it politically opportune to keep ranks closed against Israel.

Sandi Hilal, Alessandro Petti, and Eyal Weizman propose that just as Israel takes the liberty of building settlements beyond the Green Line, the Palestinians should similarly be granted settlements on the Israeli side. By insisting that such settlements be reserved exclusively for openly gay and lesbian Palestinians, however, leftists and liberals could convert their unease with Palestinian society into a pro-Palestinian territorial demand.

Would gay and lesbian Palestinians shy away from moving into such reservations because it would amount to treason against Palestine? But for each settlement, its residents as well as the Palestinian state would have the choice whether to include it in the latter as an autonomous zone or not. Might Palestinian militants masquerade as gays and lesbians just to erect such settlements? But that would already undermine Palestinian chauvinism.

The gay and lesbian settlements might point the way toward a comprehensive solution for Israel and Palestine: one based on reservations. Both Jews and Palestinians claim to be the true natives of Canaan. Okay, then the international community should help both sides to get their own reservations, like Aborigines or Native Americans, but not more. The reservation is per se an unsatisfactory form of reparation.

In a first round, applications are accepted as to which sorts of reservations should be created—including reservations, for instance, for Orthodox Jews, Arab Christians, or Jewish and Palestinian gays. In a second round, all Israelis and Palestinians can vote whether they want to live on a reservation and of which kind. The boundaries of the reservations are then demarcated in a way that requires as little resettlement as possible to meet everyone’s preferences. As a basic rule, anyone who has resided somewhere for a set minimum number of years retains the right for him and his descendants to remain there.

In order to make more room, additional states can offer to create reservations. Originally, the Zionists wanted first and foremost to give Jews their own state—where it would be was of secondary importance. When I visited a Palestinian refugee camp near Tripoli a good ten years ago, the rumor was going around that there was a plan to bring all exiles in Lebanon to Sweden. People thought it was a horrible, dark scheme, since they wanted to go back to Palestine, even if most residents of the camp had never seen it with their own eyes. What must be even more horrible, though, is that they are in reality simply not wanted anywhere. So it is perfectly conceivable that many would agree to resettle in an extraterritorial Palestinian reservation if they were also given Palestinian passports and granted freedom of travel.

The Inversion of Palestine-Israel

If the technology of land reclamation had made enough progress, Israel-Palestine could simply be duplicated off its own coast. In this duplicate, the Palestinians would be entitled to all areas held by the Israelis in the original state, and vice versa. If Israel is unwilling to relinquish sovereignty over Israel and Palestine, the Palestinians could become the leading nation in the replica.

But perhaps an existing state is prepared to cede a piece of land of adequate size. This might give Germany an opportunity to finally live up to its historic responsibility. As a whole, the country is densely populated; but on the territory of the former GDR, which is roughly four times the size of Israel and Palestine, it suffers from massive depopulation. Since its reunification in 1990, Germany has invested hundreds of billions of euros in modern infrastructure. Nonetheless, jobs are scarce, and entire neighborhoods are threatened by demolition because of large numbers of vacancies. The reservationization of Israel and Palestine, including beyond their current borders, could be an important step in overcoming the nation-state toward a world state, setting an example to be emulated all over the world. Western Europeans, for example, already complain about being overrun by foreigners, even when Muslims account for no more than 5 percent of the total population. Given the differences in birthrates, the native population may in fact find itself marginalized over the medium term. It doesn’t help that, over the past decade, Germany has raised subsidies for procreation faster than those for anything else. Nor does ghettoizing the future majority help, which will only radicalize it and drive its birthrate up even further. If the Germans absolutely want to preserve themselves as an ethnic group, they should in due time provide themselves, too, with one or more reservations within Germany. 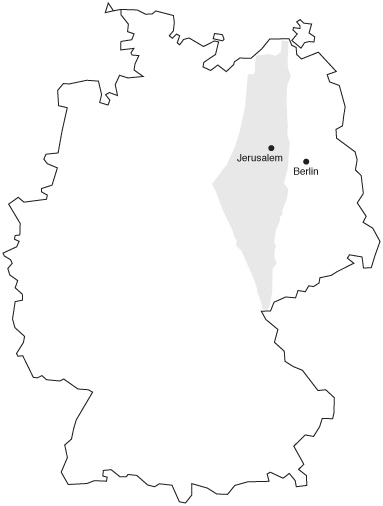